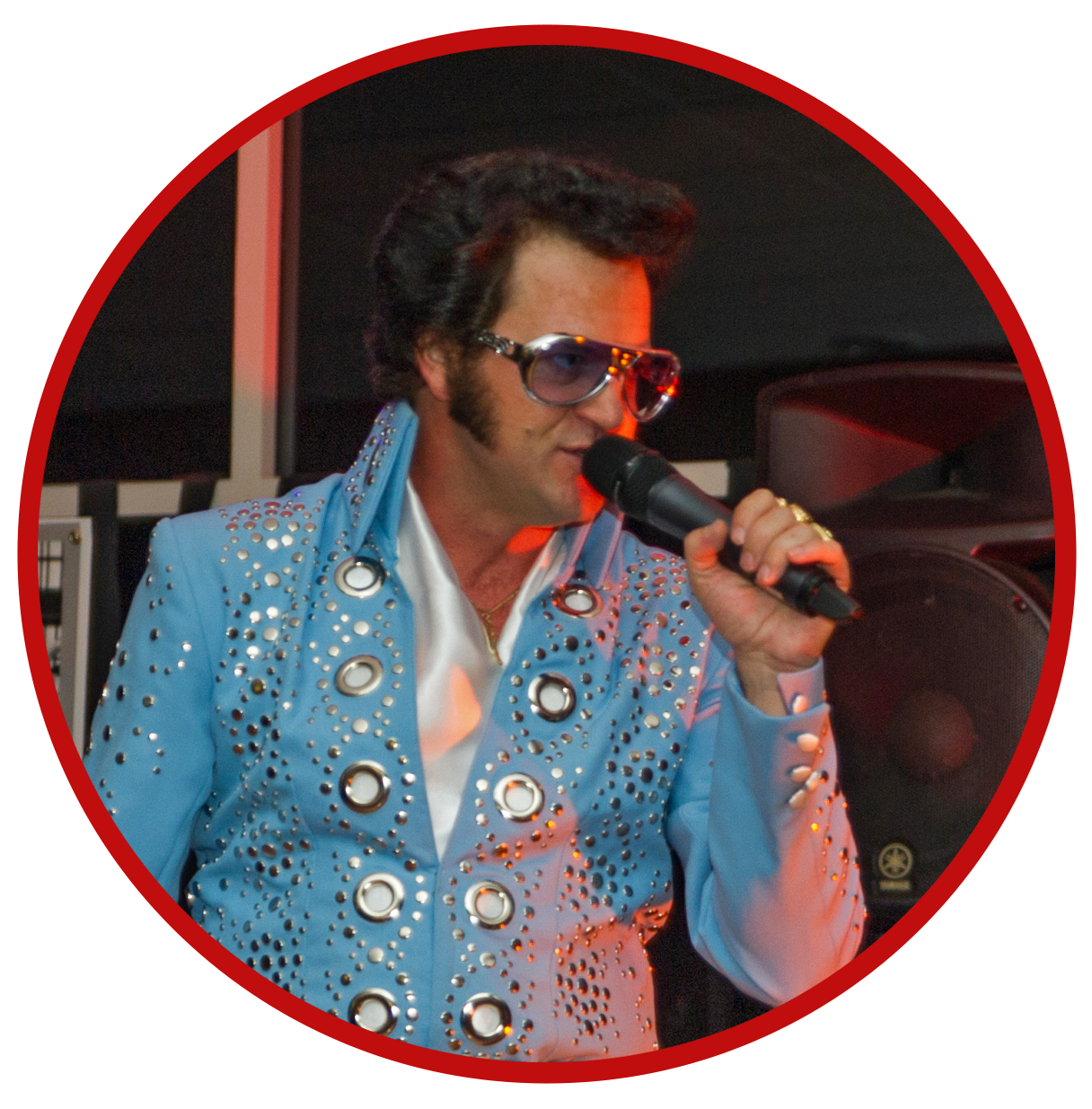 Elvis may have left the building but his legend will live on forever. The King of rock n’ roll is more popular now than ever with new generations of fans. Lemvis’ Elvis tribute show is in the style of Elvis Presley’s early 70’s and Vegas eras.

Lemvis works the crowd and uses his humour, moves, charm and most importantly his voice to captivate audiences. Hips will be swivelling and lucky ladies will be treated to scarves along with a heartfelt serenade in true King style that will leave them weak at the knees. This is no ordinary sit down and watch me show. It is extremely interactive and the audience becomes a part of it.

With over 10 years in the business and a repertoire of over 200 classic Elvis songs this show will have your building rocking no matter the event. It can be tailored to suit budget and venue and all show production is supplied.

If you want an Elvis tribute artist that looks and sounds like the King then Lemvis is the man. Ladies and Gentleman…Lemvis is in the building. Lord almighty, I feel my temperature rising.

JOHNNY CASH – The Man In Black 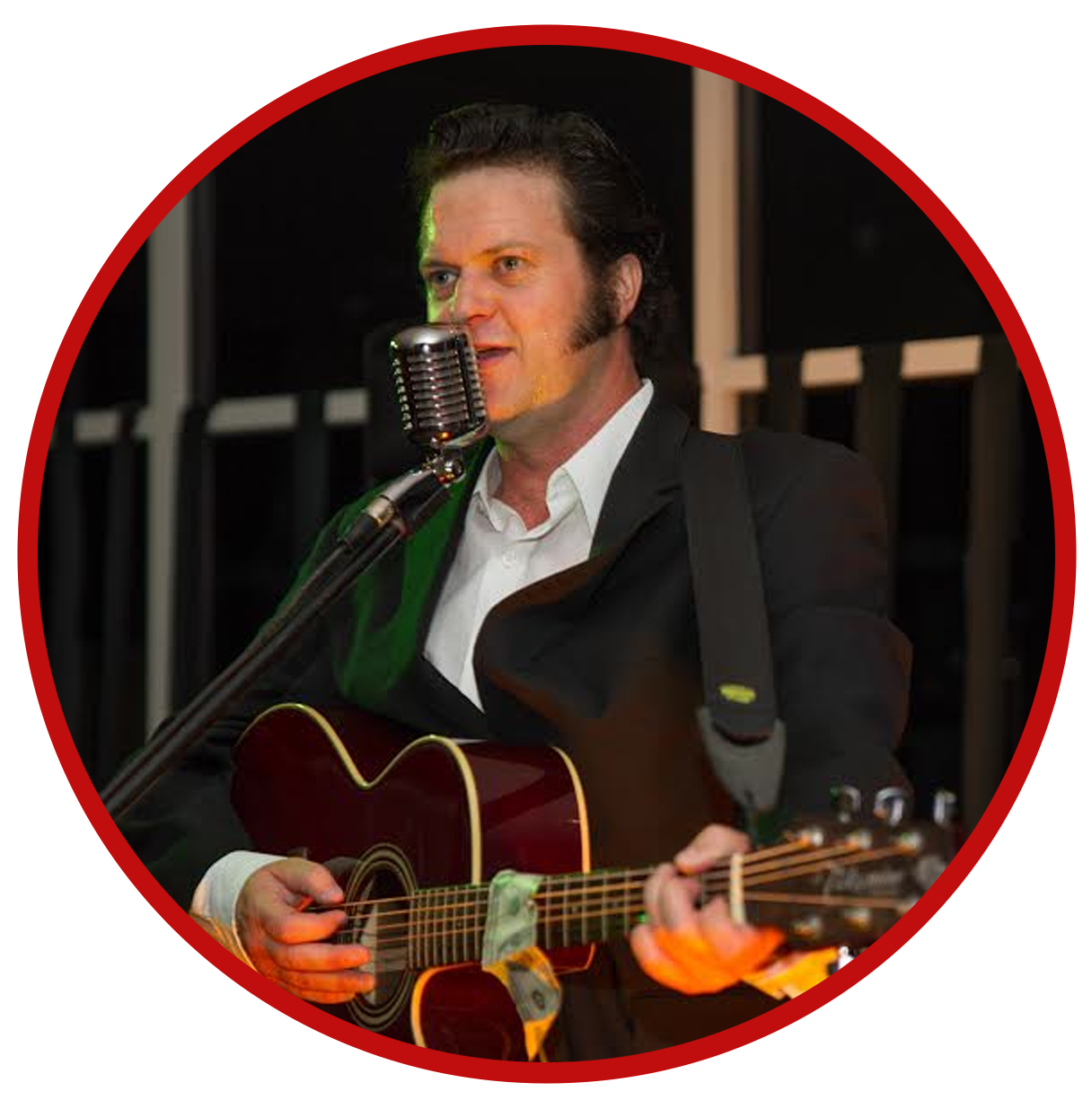 Johnny Cash is one of the most influential music icons of all time and his music and legend are more popular than ever with fans young and old. Now you can bring the Man in black to your event signing those classics songs about trains, prisons, love and heartache.

Unlike most Johnny Cash tribute artists, Andrew portrays a younger Cash (50's & 60's). When he was in his prime, when his voice was strong and when he had his biggest hits.

Andrew blends his deep voice with expert timing, charisma, rhythm and humour as Johnny once did. Classic Cash songs like ‘Ring of Fire’, ‘I Walk the Line’, ‘Sunday Morning Coming Down’ and ‘A Boy Named Sue’ are sure to bring the house down.

The show can be tailored to suit your needs and can be either solo (with professional backing tracks) or with a 3 piece live band (Cash Train Show). I hear the train a comin’. 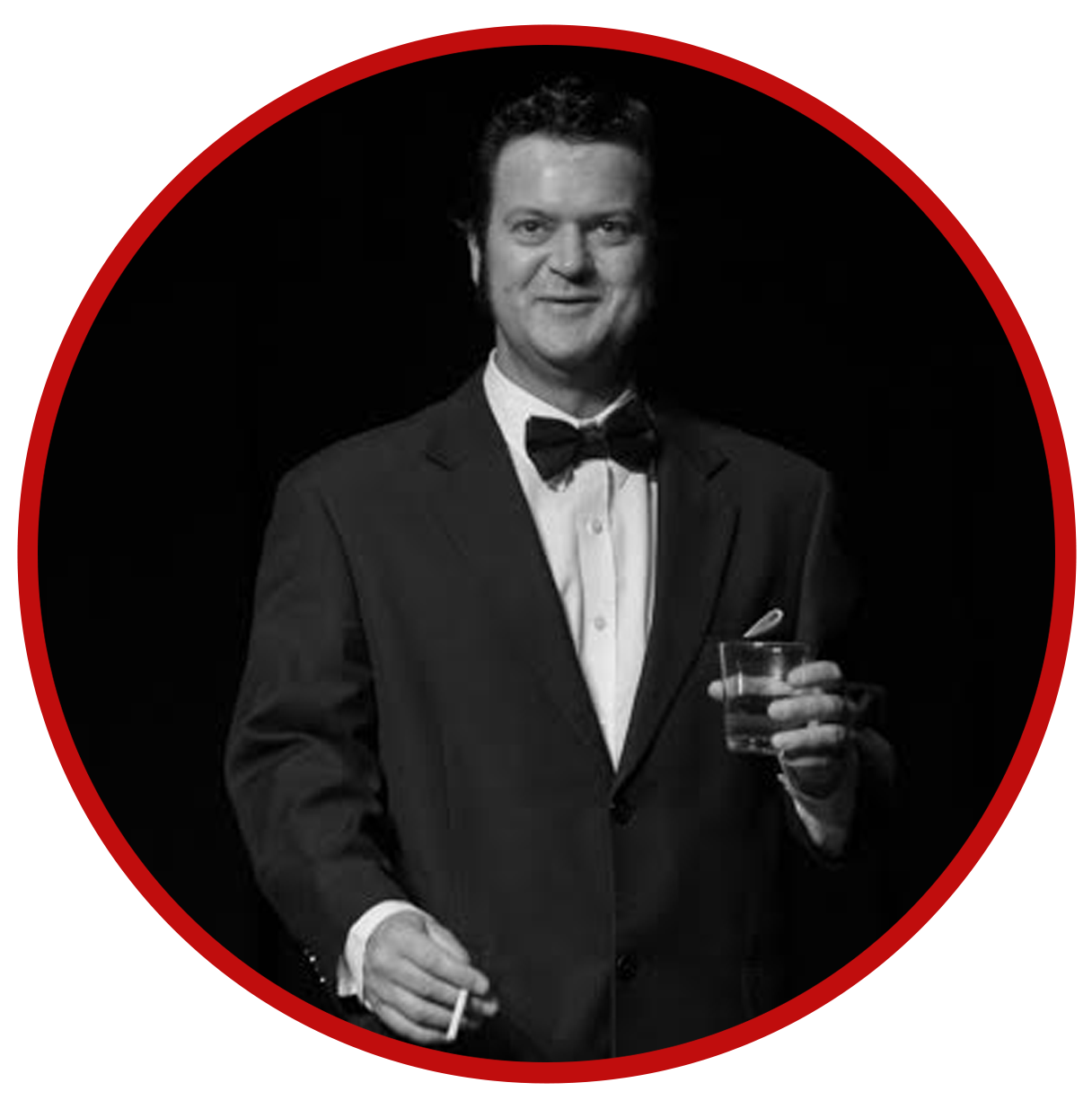 They don’t make entertainment like they used to..........Until now. Let the Rat Bags take you on a journey back to the golden era of swing. From old smoky bars to the Sands Casino Hotel in Las Vegas where the Rat Pack once ruled the town. These two experienced performers will have you sipping your martinis with a smile.

Australia's Old Blue eyes Tony Haley teams up with cool crooner Andrew Leonard to pay tribute in song to swing kings Frank Sinatra and Dean Martin in a classy, funny, interactive and extremely entertaining show. Their timeless classics are portrayed with a fresh and energetic approach. Tony captures the essence of Sinatra with his dynamic vocals and style while Andrew delivers the smooth and soothing tones of Dino with their voices blending together beautifully.

These guys work brilliantly with each other and have received rave reviews. This is no cabaret style act, these guys just do what comes naturally. This show is sure to add a touch of Vegas to your event. Come fly with us!

“Cash is King” is a show which pays tribute to two of the finest artists the world has ever seen. The King of rock n’ roll, Elvis Presley and the Man in Black, Johnny Cash. A show where rock meets country and legends are reborn.

Lemvis will take you on a mystical journey from the early Memphis Sun records days to the present. Lemvis captures the spirit of both entertainers in voice, mannerisms, charisma and song and is sure to leave audiences raving and wanting more.

“Cash is King” has been packing out venues all round Canberra and NSW. This show appeals to audiences young and old alike and is sure to have your guests singing and dancing the night away.

For all clubs and pub shows high quality personalised A3 promotional posters and full sound and lighting production provided. 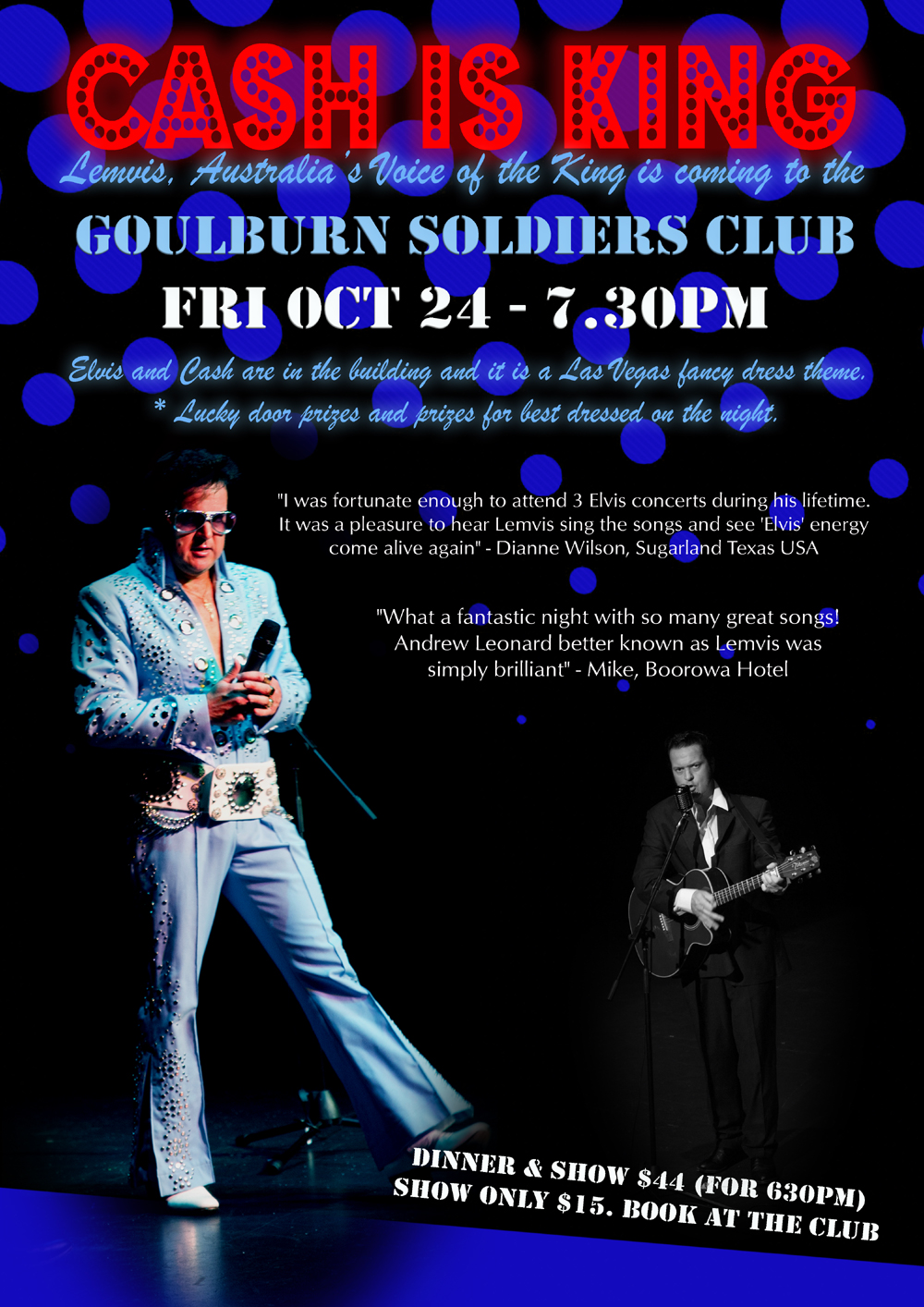 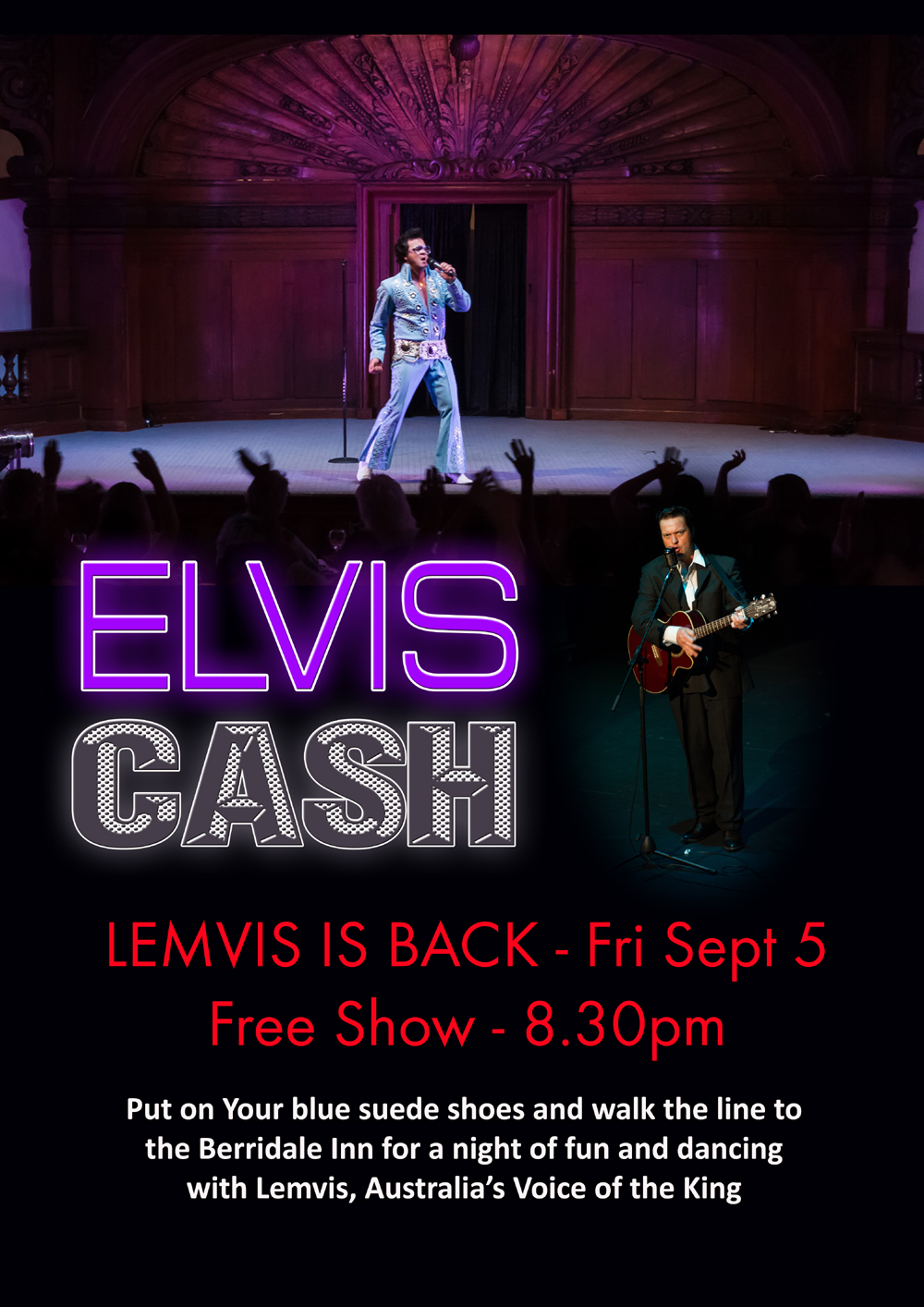 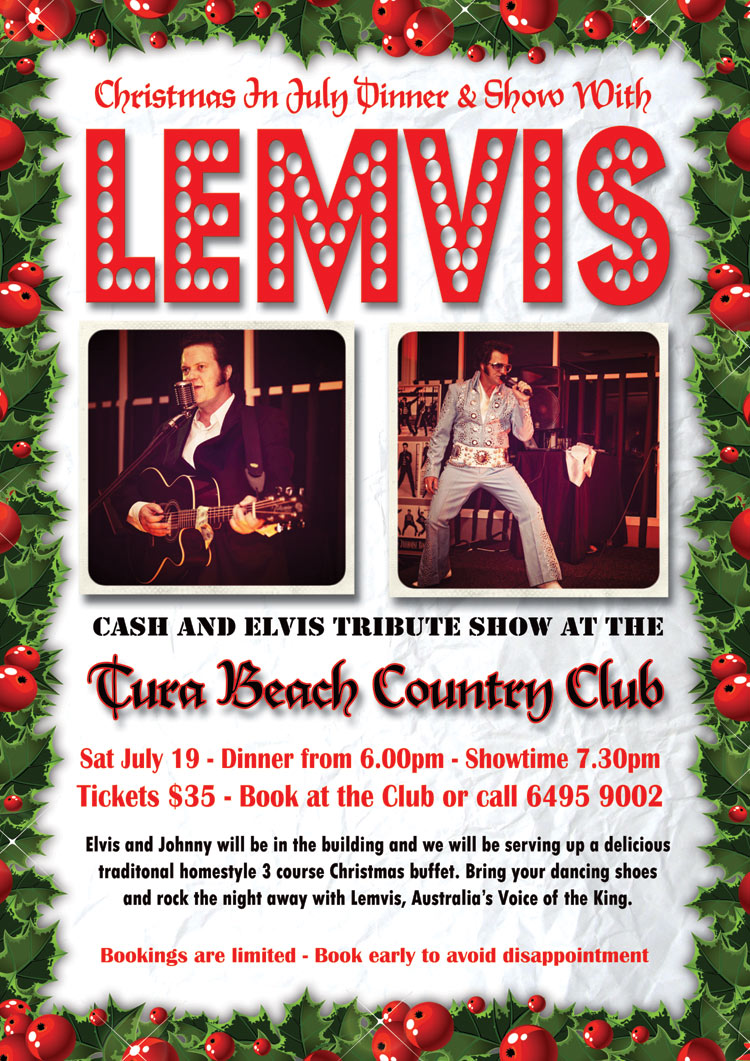 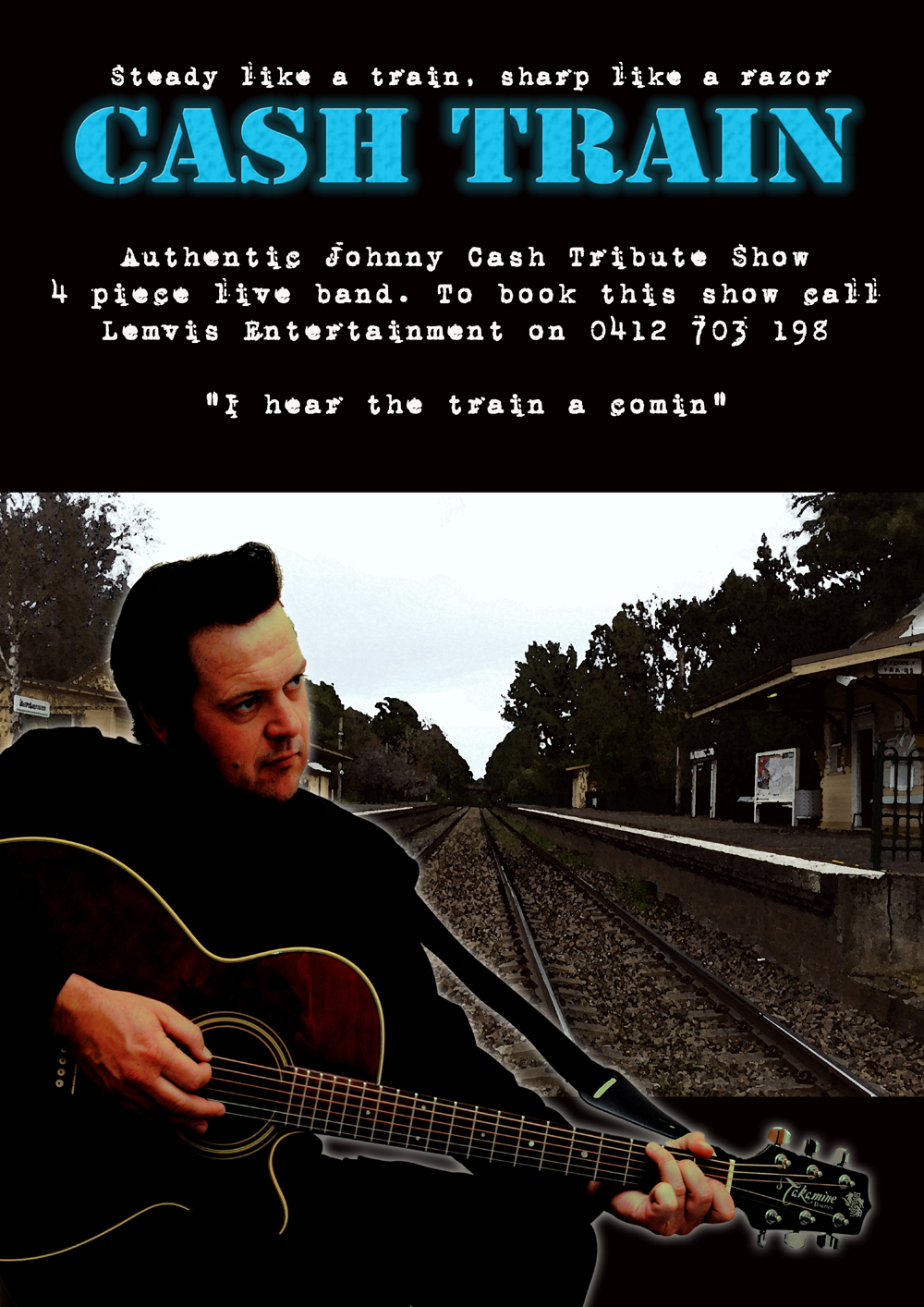 Phone: 0412 703 198
Email: This email address is being protected from spambots. You need JavaScript enabled to view it.